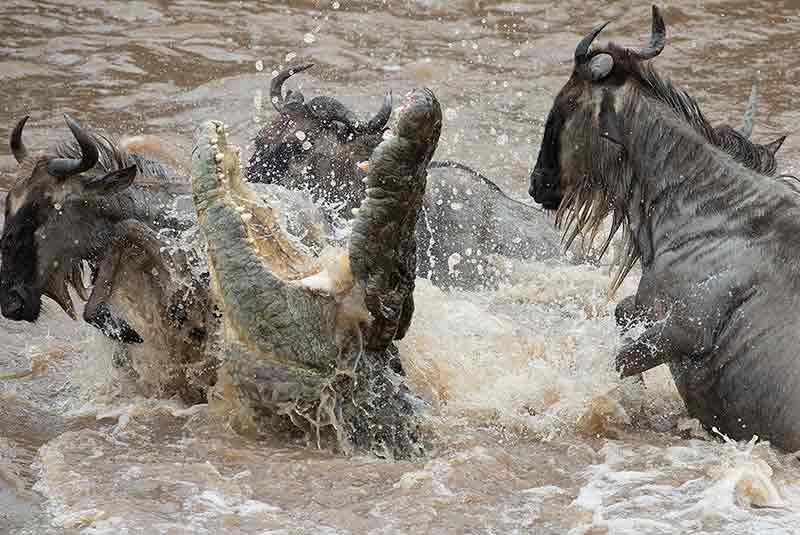 To get the very most out of your safari to Africa and The Great Migration here is some well learnt advice.

Nature’s oldest pilgrimage plays out on the endless plains of the Serengeti National Park and the Maasai Mara National Reserve, as over a million wildebeest along with gazelle and zebra stragglers charge towards better grazing areas. This is the stage on which the ‘greatest wildlife show on earth’ plays out, as it is by far the largest mass movement of land mammals on the entire globe. These mass ungulate herds cross plains and rivers as the seasons change and rain-ripened grasses are depleted in their area, forcing them to move on to the next.

The Great Migration has been listed as one of the Seven Natural Wonders of Africa. Not only does it offer incredible views of the plains dotted with huge herds of wildebeest, zebra, and gazelle, but the rivers are often infested with large Nile crocodiles lying in wait. Some of the best safari opportunities in the world are found here, across a landscape made up of volcanic grasslands and vast plains interrupted by rocky outcrops, rivers, and forests. Visiting the right area in the right season will treat travelers to astonishing sightings of this natural phenomenon.

These migrational herds also attract the attention of some of the continent’s most renowned predators, ensuring that if travelers are following the migration big cats, crocodiles, and hyenas will never be too far behind.

Where is the Great Migration?

The Great Migration generally moves in a clockwise motion through the Serengeti Plains in Tanzania and the Masai Mara Reserve in Kenya, and then back again forming one big circle. The herds visitors can see is dependent on the time of year and location they are visiting.

When is the Great Migration?

The exact timing and route of the migration changes from year to year and is entirely dependent on the rains.

In January and February, the annual rains hit the Serengeti allowing the female wildebeest to give birth. By March or April, the area has dried out and become desolate again so the massive grouping of animals are forced to move northwards toward Lake Victoria where they begin the mating season. After this, they head towards the Maasai Mara in June or July and this is where most people witness the sight of thousands of animals galloping across the plains and crossing the notoriously, crocodile-infested Mara River.

River crossings are best seen between July and September. The animals cross back and forth between the two areas during this time. In September, the animals cross back into the Serengeti. After September, there is still a tail end of the migration which lags behind the main herds. If you are late, you can still hope to catch the last of them. The animals then go back to the Serengeti plains from where they started at the beginning of the year.

In Tanzania, the best time to witness the migration is divided between two different periods. In the Southern Serengeti it is in February and March. The animals are grazing and can be seen in their immense numbers. It is also a good time to see the animals dropping their young. In contrast, river crossings are best seen between July and September in the northern Serengeti.

How do I get there?

Most visitors will fly into the Kilimanjaro airport in Arusha in Tanzania and start their journeys there. Major airlines such as KLM, Turkish Airlines and Qatar Airways fly directly to Kilimanjaro Airport.

As always, nothing is guaranteed when it comes to wildlife. The movement of the Great Migration is determined by the rains and so we can never say in advance precisely where the herds will be. In order to guarantee sightings, we recommend booking multiple lodges and destinations.

There are three ways to get you to the Great Migration:

The second option is to do a private safari by road where you and your travel party are accompanied only by your personal driver/guide. With this approach, you have the flexibility to stay at different lodges and you can determine which national parks you would like to visit.

A scheduled trip is one where you can join a group (of maximum seven people) who share the vehicle and driver-guide costs. This is the most affordable way of travelling but it is also done by a predetermined road route and there is no flexibility. Here, you save on costs but are limited to a set itinerary and predetermined lodges.

Visitors are required to get a yellow fever vaccination and to carry proof of this vaccination with them. The risk of malaria here is moderate but travelers are advised to take a prescription antimalarial drug, use insect repellent, wear long pants and sleeves to prevent bites, and sleep in well-screened rooms.

Please note that the level of risk for vaccine-preventable diseases can change at any time. See a health-care provider at least 4–6 weeks before your trip to allow time for your vaccines to take effect and to start taking medicine to prevent malaria.

Here are some fascinating Great Migration facts you might not know:

The Great Migration sees over 1.5 million wildebeest, 200,00 zebra and a host of other antelope travelling cross country.

The Great Migration is the largest overland migration in the world. The animals travel a total of 800 kilometers or more during each cycle.

While the migration may seem like a chaotic frenzy of movement, research has shown a herd of wildebeest possess what is known as ‘swarm intelligence’, where the wildebeest systematically explore and overcome an obstacle as one.

The reason why zebra and wildebeest graze in harmony together is because they each eat different parts of the same type of grass.

Because wildebeest have no natural leader, the migrating herd often splits up into smaller herds that circle the main, mega-herd, going in different directions. When considering these smaller, split herds, the whole migration can cover over half of the whole Serengeti.

The Serengeti National Park ecosystem is the oldest on the planet. It boasts a diversity of plants and animals that is unavailable anywhere else on the globe.

During the migration around 250,000 wildebeest and 30,000 zebras are killed off every year as a result of predation by carnivores, but also from thirst, hunger, and exhaustion.

The crocodiles awaiting the herds in the Mara River drown their prey by clutching them in their strong jaws and pulling them below the water, twisting them to break off bite-size pieces. A crocodile can lunge more than half of its body length out of the water to grab a potential victim and can also use its tail as a secondary weapon.

There are more than 3,000 lions currently living in the Serengeti ecosystem that follow the migratory herds across the reserve.

Read our Country Information for travel advice to Tanzania. Have a look at Ubuntu Migration Camp as an option for your holiday. For a current look at the Great Migration read our other migration blog.

For further information on this incredible spectacle and to book your place contact our Reservations team: [email protected]