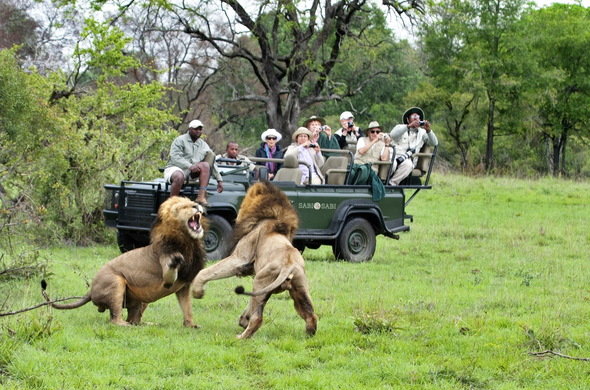 South Africa is unique in offering several malaria free safari areas. This is ideal if you have young children. Or if you cannot take anti-malaria medication.

Madikwe Game Reserve, the Waterberg and the Eastern Cape game reserves all offer the ‘Big Five’ as well as plenty of general game.

The Eastern Cape, the Pilanesberg (another malaria free safari region) and the Waterberg are also more accessible than the traditional safari areas. This means reduced travelling time, especially important for families with young kids.

The 75 000 hectare Madikwe Game Reserve boasts a healthy wildlife population including plenty of predators, elephant and buffalo.  It is especially known for its wild dog sightings though these cannot be guaranteed.

Alongside the Eastern Cape lodges, Madikwe is at the forefront of offering child-friendly safari experiences with many lodges offering a children’s safari programme with special activities and even kiddies game drives for the very young.

Madikwe Game Reserve is pretty remote, about 4 to 4½ hours’ drive from Johannesburg or a one hour charter flight. It offers the most classic ‘African’ terrain of all the non-malaria reserves with open savanna plains and views for miles from its hills. It also has the most consistent game-viewing. But its remoteness may not suit everyone.

The Eastern Cape is the other prime malaria-free safari area in South Africa. The original Addo Elephant National Park has been joined by several private malaria-free game reserves such as Shamwari, Kwandwe, Kariega and Amakhala. Its attraction – the accessibility from the Garden Route – can also be a negative. Some lodges are almost too close to civilization.

As with Madikwe, the Eastern Cape has a number of family-friendly safari lodges with excellent kids’ safaris. These vary considerably in nature so chat to us about your preferences. The Eastern Cape game reserves are around 1 to 1½ hours’ drive from Port Elizabeth and about 3-4 hours from the Garden Route.

The third main malaria-free safari area is the Waterberg, only 2½ to 3 hours drive from Johannesburg. The Waterberg is a stunning area of natural beauty. This dramatic forested plateau is dissected by ravines and waterfalls with panoramic views over the plains below. The area is home to several private game lodges. Some offer Big Five game viewing and luxurious accommodation. Others offering a more relaxed game-viewing experience without major predators, where you can enjoy horse-riding safaris and walking.

The Waterberg is ideal if you are short of time as it’s close to Johannesburg so a 2 night safari is perfectly possible without spending too much time travelling there and back. For that reason, its great to add to another safari destination such as the Kruger, Eastern Cape or Madikwe. It is exceptionally beautiful but the game-viewing is not as consistent as Madikwe or some Eastern Cape reserves, especially in terms of predators.

One of our favourite malaria free safaris is at Tswalu Game Reserve in the Kalahari Desert. This offers a superb wild safari experience. But with charter flights in and out as well as luxurious accommodation it can seem costly.

The Pilanesberg National Park is an easy 2 hour drive from Johannesburg in a hire car or transfers can be arranged by us. This park has good game sightings of lion, elephant, rhino, buffalo and other general game. Leopard are also occasionally sighted. Tented Adventures has warm comfortable tents, are family friendly and have received wonderful Trip Advisor reviews.

For information on travel to South Africa read our travel information.